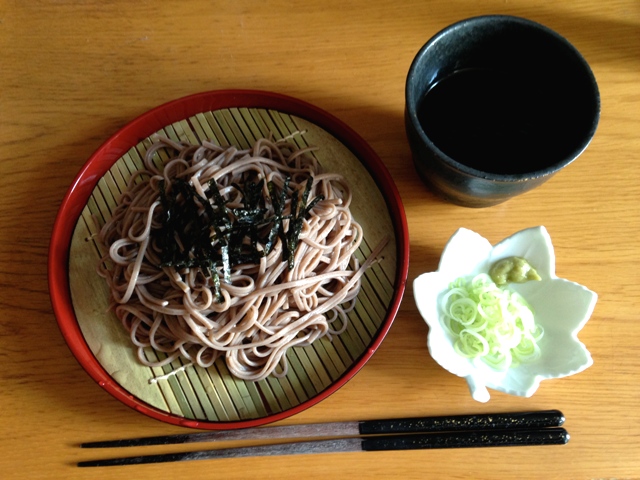 This summer, it’s very hot and humid in Tokyo.  Such a hot days, I want to eat something cold and also easy to eat like noodles.  Zaru Soba or Soumen are my favorite for this condition.

Soba (Japanese Buckwheat) has long history.  It is said that Soba was eaten before Nara Era (710 – 794 AD).  Now it’s 2013, so it has more than 1300 years.  But it was not popular food for long time, and it seemed to be stocked by farmers in preparation for hunger.

1) Boil Soba noodles.  (Time to boil is according to the instruction of the package.)  Then make it cool with water in strainer. 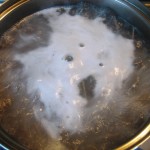 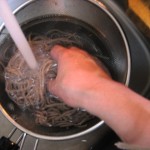 3) Combine Mentsuyu and cold water.  (The ratio of Metsuyu and water is different depends on package.  And there are some Mentsuyu without diluting.)

4) Place cold Soba on a dish and put dried seaweed on top of it. 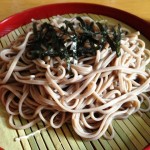 Zaru Soba is usually served on bamboo sheet.  A Soba shop in Fukagawa area in Tokyo served as this style first.  It was getting popular and many people liked it.  So other Soba shops imitated, then this style became standard. 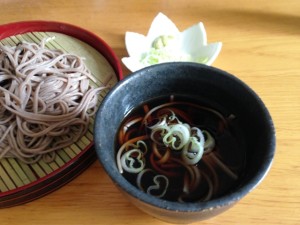 The eating method is to add a little wasabi to Soba noodles and dip in the soup, and then put some leek in the soup.

Sometimes, we call Ramen as “Chinese Soba (Chuka Soba).”  To distinguish with it, Soba is called “Japanese Soba”, too.  But Soba doesn’t mean noodles.  It the name of a cereal.  I am not sure why we call Ramen as Chinese Soba, but I guess people distinguish Udon and Ramen.  These two noodles are white, and difference in appearance is thickness.  The thickness of Ramen is similar to Soba.  So it may be called as Chinese Soba.