You are here: Home › Vegetales › Fried Vegetables (Yasai no Suage) 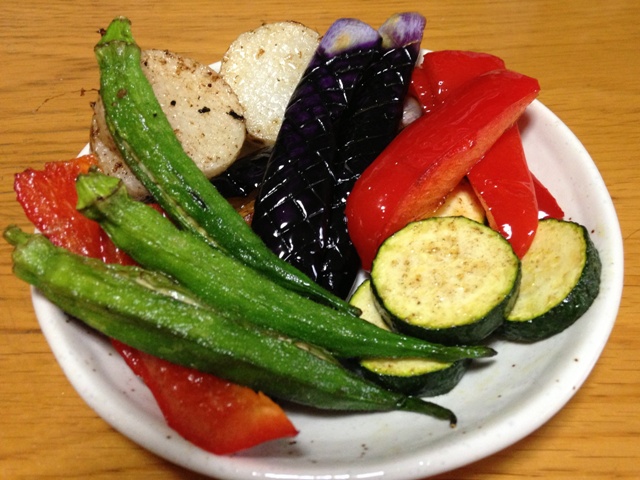 This menu is called “Yasai no Suage” which means fried vegetables without any coating.  In Japan, there are some fried foods such as Tempura, Tonkatsu, Karaage etc.  They have coating, but Suage has no coating.  “Su” means nothing is added.  “Age” means “fry.”  So it is called Suage.
At this time, I picked seasonal vegetables in summer such as Egg Plant, Okra, Paprika, Yam and Zucchini. 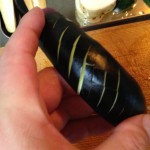 2) Add a cut on Okra to avoid explosion during fry. 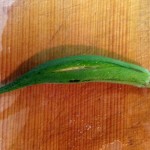 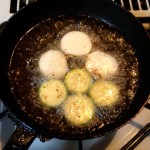 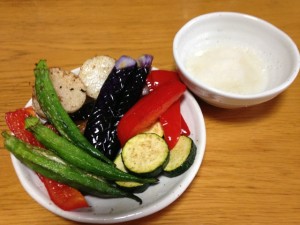 I had it with grater radish and Ponzu (Soy sauce, broth and some citrus).  It tastes light and is good for hot summer.  In summer time, we can enjoy various colors of vegetables.  So I like this foods and it is easy to cook.
I didn’t peel the skin of Yam at this time.  If you want to peel, it will be also good.

Okra is called also Okura in Japanese.  I have been eating it since a kid, and I thought it is Japanese name and Japanese traditional vegetable.  But it came from United States around the beginning of Meiji era (1868 – 1912).  Similar vegetable called “Neri” existed and still exists in south part of Japan such as Okinawa, Kagoshima prefecture.  Okra was called “America Neri” at first.  Its spread nation wide is since around 1975, and was called “Okura (Okra)” and not used “America Neri.”   So now most people in Japan call it as Okura.

Now Okra is used for many Japanese foods.  In the future I would like to introduce some.

You can find Ponzu: