You are here: Home › Vegetales › Baked Eggplant with Broth (Nasu no Nibitashi) 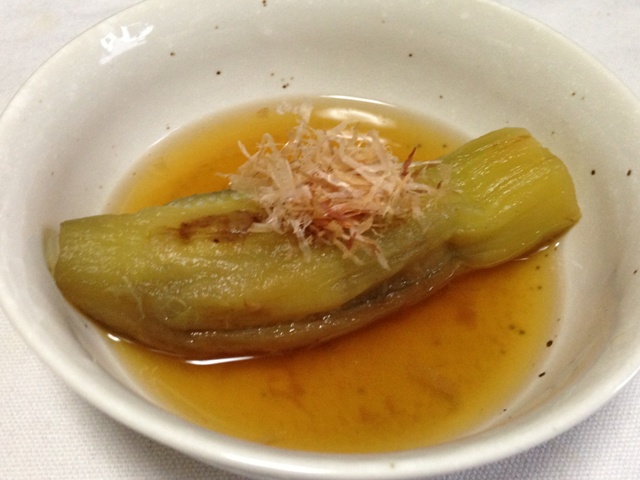 I have introduced Baked Eggplant (Grilled Eggplant may be better name…) before.  “Nibitashi” is another cooking method of it.
The method is almost same, but this is added one more method to simmer eggplant with broth.  With simmer it, the gentle taste is added.  If you make it cold in the fridge, it will be very good meal for hot summer days.

1) Bake the Eggplant on a fry pan (without oil).  Then make it cold in ice water and peel the skin.  This is as same as making Yaki Nasu (baked eggplant).

2) Mix broth and soy sauce in a pan and heat it.  When it boiled, put Yaki Nasu (baked eggplant) in a fry pan and simmer for about 3 min. 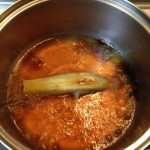 3) Stop heating and leave it for a while to make it cool.

4) Place eggplant on a dish, pour broth and put some dried bonito flake (katsuo bushi) on top of it.

For hot summer days, it also would be better to leave simmered eggplant in fridge.  It becomes cold and very easy to eat because you don’t want to eat only hot dishes, didn’t you?

There is a similar recipe called “Agedashi.”  It is the dish that fried eggplant will be simmered in a broth.  When it is fried, there is no coating.  Just like Suage method.  It is also good.

When I am browsing web sites, I can find some different “Nibitashi” recipes.  Some are simmering eggplant with broth without any preparation such as baked (grilled) or fried.
This dish is home made food.  So I think there are many methods depends on each homes.