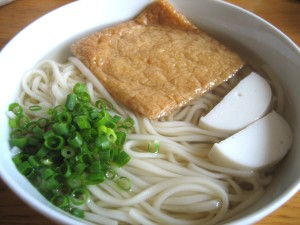 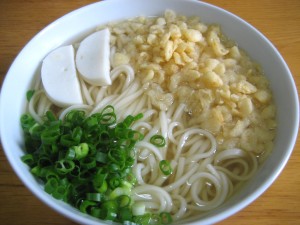 Do Japanese people eat fox and raccoon dog?
“No way!”

Don’t worry!  They are  just a name of foods and any fox and raccoon dog are NOT cooked.
Above first photo is “Kitsune Udon” and next one is “Tanuki Udon”.

Perhaps many readers wander why they are named as so?
Kitsune Udon has Abura-age which is the ingredient brown and square shape in the photo.  Abura-age is fried think sliced tofu, and it is simmered with soy sauce and sugar etc.  It is said that Abura-age is fox’s favorite food.  So it is called as Kitusne Udon.

On the other hand, Tanuki Udon is udon with tempura crumb.  It is different type of udon which is easy to cook and very casual.

In Japan, sometimes fox and raccoon dog is thought as comparison because they are living in similar place (mountain) and both animals are familiar since old time. 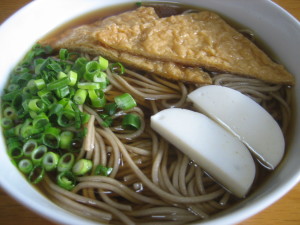 Soba with Abur-age is called as Kitusne Soba.  But it is only in Kanto area (east of Japan).  In Kansai area (west of Japan), it is called just as “Tanuki”.

The land of Japan is small.  But depends on area, people has own culture and they are still alive.

If you have any opportunities to visit to Japan, please try Kitsune (fox)  or Tanuki (raccoon dog).  Again, don’t worry.  They are just a name of food.