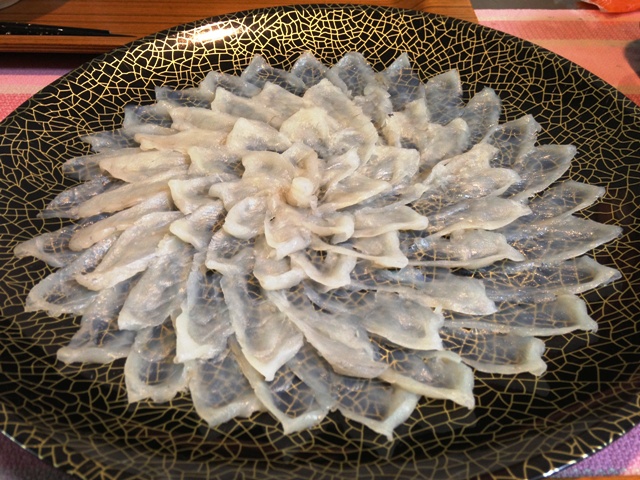 Swellfish, “Fugu” called in Japanese, is a seasonal fish in winter in Japan.
There are some popular cooking styles such as Sashimi, especially called “Usuzukuri” (very thin sliced) like above photo, Nabe (Hot Pot) or Karaage (deep fried stuff).

I like it, but I don’t remember I had eaten it when I was kid.  I think the first time to eat was 20s and I have already started working.  It was not familiar food for me and now still it is so because it’s expensive.
One reason is its poison.  It’s poison is very strong and enough to die.  Even recent years, some people died after eating Fugu almost every year.  To cook it, its internal organs should be removed properly.  It’s a preparation process and people who can do it need the license.
We can buy fugu fish meat at supermarkets or fish stores today, and they are already prepared (remove internal organs).

I don’t know which area has a custom to eat it in the world.
Today, we can eat it anywhere in Japan, but it was not allowed some time in the history.  In 1882, the government enforced the low not to eat it.  One story is saying that Hirofumi Ito who was the first prime minister had eaten in Yamaguchi prefecture and been very impressed about that taste.  Then he allowed eating Fugu only in Yamaguchi pref.  Now Yamaguchi is the famous place of Fugu. 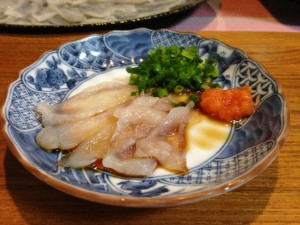 We usually eat Sashimi with soy sauce and wasabi (Japanese horseradish).  But if we eat Fugu Sashimi, with Ponzu and Momiji Oroshi.  Momiji Oroshi is Grater Daikon Radish with Red pepper powder.  Momiji means maple leaves originally.  It is named after the color of red.

Also the name is interesting.  We don’t call it Fugu Sashimi.  It is “Tessa.”  And Fugu hot pot is called “Tecchiri.”  You may notice both name has same sound “TE.”  It’s a part of the word “Teppou” which means gun.  You’ll die if the bullet of gun hit you.  And also you’ll die if the poison of Fugu hit you.  So Fugu is also called as Teppou.

The another name “Teppou” seems to be dangerous.  But Fugu has another good aspect regarding the name.  Fugu sounds like “Fuku” which means good luck.  It is though as good luck food.

That taste is very light and the meat is tight.  The meat brings different feeling compare with other Sashimi fish.

From my experience, I think the price of Fugu foods in Tokyo is more expensive than in Osaka.  I have heard that about 60 to 70% Fugu is consumed in Osaka area.  So I guess the competition among restaurants makes less price, and it can be affordable for many people.  If you want to eat it with reasonable price, you would be better to visit Osaka.