You are here: Home › Vegetales › A Japanese Pickles for Curry Rice (Fukujin Zuke)

Do you remember a stuff served with Curry Rice?
It is a kind of Japanese pickles and is called “Fukujin Zuke.”  If you have been to Curry shop in Japan, you may have found it on the table.  You may see it as red.  It is colored with a chemical seasoning.  Recently brown one like above photo is major.
Many of Japanese pickles are fermented, but Fukujin Zuke is not fermented.  Because it tastes salty-sweet, it makes good harmony with spicy curry sauce. 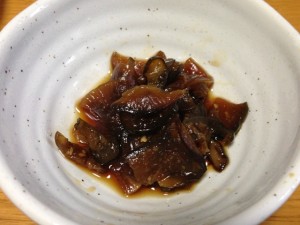 Fukujin Zuke can be served not only for curry rice, but also for regular steamed rice or a kind of snack for beer.
At this time, I made it with vegetables in my home.  But you can add carrot, lotus root, ginger etc.

Around 1902 to 1903, it seemed to be served with curry rice in the cruise ship between Japan and Europe.  Then this style was established.

We usually buy it at store.  But if you have a lot of vegetables, I think it is good to make by yourself.  Because it is very easy to make.

6 Responses to “A Japanese Pickles for Curry Rice (Fukujin Zuke)”