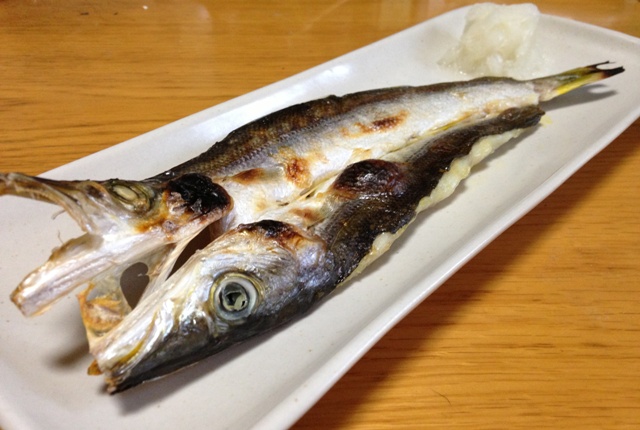 In Japan, we are eating many types of Himono.  For example, the Himono of Jack Mackerel, Mackerel, Sardine or Mackerel Pike are popular, and we can find them at fish stores or supermarket all year round.
Today, I would like to introduce how to make the himono of Barracuda (“Kamasu” in Japanese) at home.  The himono of Barracuda is also popular and I like it.

There are several type of himono depending on the method.  At this time, I made it as “Ichiyaboshi” type which means “dried it over a night.”  Normally, the himono is dried under the sun.  But I made it in refrigerator.

1) Cut the back of Barracuda and remove internal organs.  Don’t separate into 2 parts.  Keep it as one form.  This method is called “Hiraki” which means “open.”  The following video is good instruction.

2) Clean the inside of barracuda with water.  There are blood especially around backbone, clean around there well.  It is easy if you use tooth brush.

4) Place the barracuda in the salt water for about 30min. 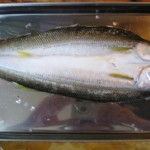 5) Wipe the water with cooking paper.  And then wrap the fish with the dehydration sheet called “Picht” from a Japanese company, Okamoto corporation.  Leave it in refrigerator for about 12 hours. 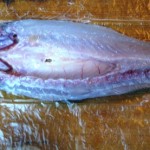 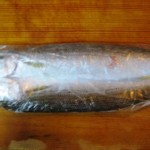 6) Grill it on the fish grill. 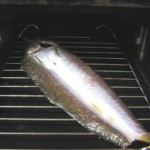 I served it with grater Daikon radish.
However it is already added the taste of salt, I think putting some soy sauce will be better.
During dehydration process, the fish will be wrapped by something like a film ,and the meat inside of it will be kept as tender.

There is another method which is using Soy sauce and Mirin (Sweet Rice Wine), and it is called as “Mirin Boshi.”

The dehydration sheet which I used is amazing.  It sandwiches a kind of syrup with two sheets.  And the sheet has very tiny halls which molecule of water can through.  That means only water included foods will move between sheets and Umami will remain in the foods.  I am not sure it is sold out of Japan.  The web site is only in Japanese.  Please see the site.  It can be used to make Pancetta or the preparation for making smoked foods.

Himono (Dried Fish) has very long history.
One story is telling that a document was recorded that it was conceded to the government as the tax in Nara era (710 – 794).  So it has more than 1400 years history.  As you know, Japan is surrounded by the sea.  It is natural that people caught and eat fishes due to this circumstance.  Of course, the method of making himono is an effort to preserve fishes longer.

Now it is very common our food culture in Japan.