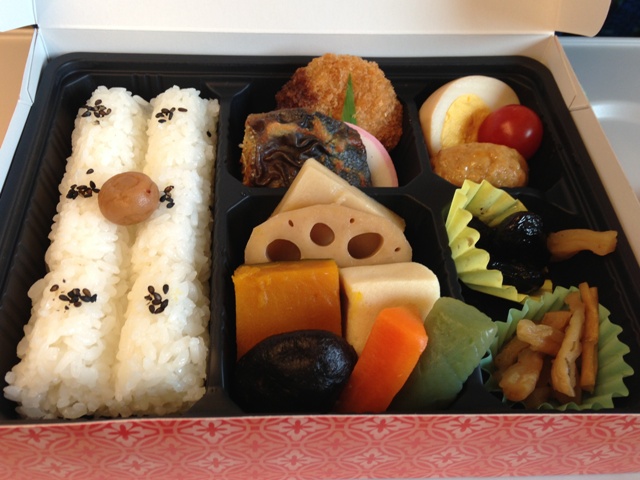 I sometimes find a Japanese word “Bento” on the web even it English site.  It means lunch box and seems to be a international word such as “Karaoke” etc.

Last week, I had a business trip by train (Shinkansen) to Hyogo prefecture where is next to Osaka.  When I have a trip by train and if I will be on the train at noon, Ekiben is one of my fun.
“Eki” means train station in Japanese.  And “Ben” comes from “Bento.”  Bento which is selling at the station for tourist is called EKiben.  There are many different types and each region has their original Ekiben which regional specialty foods are used.

Above photo is called “Makunouchi Bento” and it is very standard one.  In this context, “Maku” means a curtain on the stage, and “Uchi” means inside or between.  There are some stories why it is called so.  One story is that this type of lunch box was served at the Kabuki theater between stages.  When first stage finished, the curtain (maku) was down, and then second stage started, the curtain was up.  So it is a bento which are eaten between “Maku.”

According to Wikipedia, the first Ekiben was sold at Utsunomiya station in Tochigi prefecture, and it was Onigiri (Rice Ball).  Then Ekiben spread to nation wide.  Today, you can find it any place in Japan.

In the old days, Ekiben sales people were walking at the station and tourists bought from them because trains stopped longer time.  But recently, trains are scheduled every minutes.  We don’t have enough time to buy from such sales people.  Now those people are not seen and we buy it at the store before riding the train.

Ekiben is very popular in Japan and many people enjoy it as a friend of the trip.  As I mentioned before, there are many types in each regions.
Some department stores are doing a special event of Ekiben every year.  Reginal special Ekiben are not able to buy unless we visit there.  At the event, those special Ekiben are served at one place.  This event is very crowded because people can enjoy many different types at one place at one time.

If you have a chance to visit anywhere in Japan by train, to find and try regional special Ekiben will be one of fun for your trip.