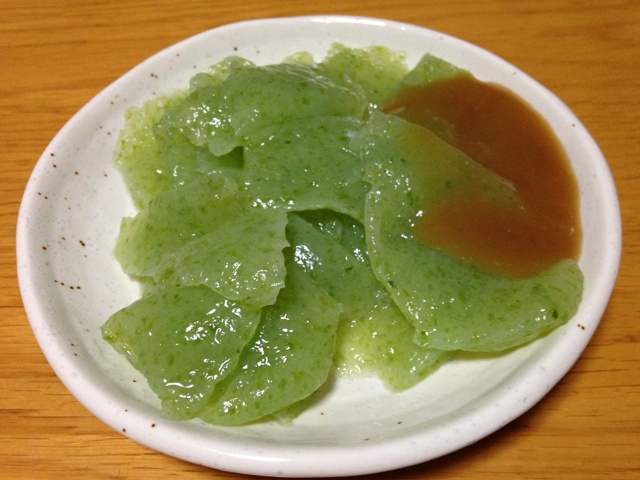 Sashimi Konnyaku is a food to eat not cooked Konnyaku.  The taste of Konnyaku is very light, so we usually put some Sumiso sauce which is combination of Rice Vinegar and Miso.

Probably, readers of this blog may not know about Konnaku.  According to Wikipedia, it is eaten only in Japan, China, Korea and Myanmar.
It is made from a kind of Taro and like jelly.  Because it is low calorie and a lot of fiber, it is popular food for diet.  It is also said that it can make intestine better.
When I was a kind, I don’t like it very well.  My mother always said I had to eat because it would clean up my intestine.

We usually don’t make Konnyaku at home.  I don’t know how to make it.  I buy it at supermarket when I use for cooking.  In Japan, it is used for an ingredient of Miso Soup, Nimono (Simmered Stuff), Tonjiru (Miso Soup with Pork and vegetables) and so on.  Sashimi Konnyaku is different from those foods because it is eaten as it is.

If you heard the word of “Sashimi,” you may imagine thin sliced raw fish.  It’s correct, but that word can be used not only for fish, but also meat or vegetables.

As for the vegetables, Takenoko, Yuba and Konnyaku are famous.
Whatever it is fish, meat or vegetables, Sashimi is a food which is thin sliced and raw or almost raw (lightly roasted).

If you are in Japan, you can find packages of Shashimi Konnyaku.  Normally it is with sauce, so it’s already “out of box.”  You don’t need cooking.  Please try it.